Golf and the Physics of Flight

Several factors influence the flight of the golf ball:

The image below shows what the ball flight will be with the 9 possible face and path combinations. 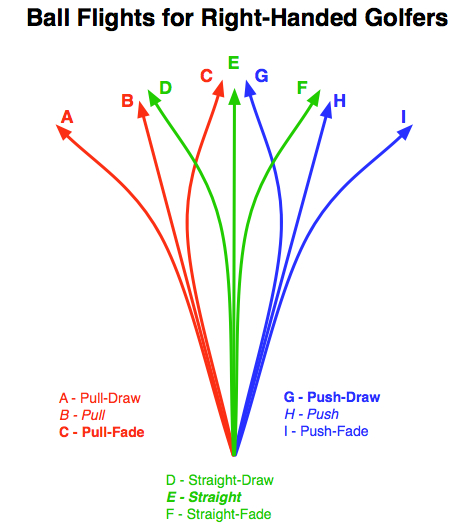 While the laws of physics have been around forever, the golf world's understanding of these laws has been developing only recently. Books written by golfers that we have all watched on TV had some very egregious assumptions about the flight of ball.

One PGA Pro wrote in his book that the reason the Driver produces such a long flight was because the ball was struck with the club face on the way up causing top-spin. Probably made sense to him at the time just as the belief that the sun traveled around the earth made sense to people at one time.

One of the most recognized golfers in the world maintained that he was able to curve the ball by keeping the ball on the face of the club as the club face was rotating to impart spin on the ball. It probably felt that way to him, but almost golf instructors know that "FEEL ISN'T REAL".

Why is this important for the golfer know? Golf is a game of  'Connect the Dots'. Get from Point A to Point B with the least number of shots and you win. Continually miss your intended target and you lose. If a golfer can patiently study their game and their ball flight tendencies they can apply the ball flight laws to improve. If we accept the fact that initial direction is always governed by the direction of the club's face at impact we begin our improvement process by getting a predictable initial direction

By focusing on just one thing "The clubs face at the moment of impact" we can begin to predict with certainty the initial ball flight direction. If we know what our natural swing path is and the curve that path imparts on the ball we can adjust out initial aim point accordingly.

Look at the chart above. Most everyone would assume the target is E. But if the majority of your swings produce a ball flight that curves to F you are missing your intended target. Simply change your initial direction to B and that same ball flight will land you at your target F.

It is simple physically but it is not easy mentally to adjust your initial aim point. Most golfers will struggle with the idea of hitting the ball away from the intended target, resulting in a swing that points the club back to the final target (E) and creating that big slice.

Practice a lot, then practice more. Learn to return the face of the club square to the intended initial direction. Your natural swing path will take care of correcting the initial direction with a nice smooth curve to the target.